Robert F. Maguire III, California
By descent to current owner
Back
“But, after all, the aim of art is to create space – space that is not compromised by decoration or illustration, space within which the subjects of a painting can live.” – Frank Stella

Frank Stella is one of the most relentlessly interesting artists this country has ever produced. His Black Paintings of 1959 represent ‘ground zero’ for an artist who never wavered from creating art that is only about itself; its materials, its surface values, and perceived on its own terms. He pressed forward from that watershed moment, intent upon advancing new modes of expression — a new way of painting, a new kind of sculpture, and new ideas about how to offer art separated from the formalities of the museum and gallery experience.

In 1989, Stella was contacted and subsequently commissioned by The Southern California Gas Company to create a gigantic mural to be painted on the south and east walls of the adjacent Pacific Bell Company building. At more than 35,000 square feet, the mural, Dusk would claim several titles: largest abstract in the world, the largest in Los Angeles, and the costliest outdoor installation using paint as a medium.

The maquette upon which Dusk is based is a layered montage of paper collage, images of metal construction, tape, push pins, and scraps of paper. As Stella watched four muralists scale the walls, rope-suspended, and wielding rollers and high-volume, low-pressure airbrushes transforming that third dimensionality of the maquette, he was transfixed: “Look at him roll that on. I love it…That black is just dynamite. I didn’t expect it to come out like this.” (Muchnic, Suzanne, August 7, 1991, “Whaling Wall: Frank Stella Tackles His Largest Project Downtown”, Los Angeles Times) Think of the mural as a sort of trompe l’oeil interpretation of the maquette whereupon the pushpins, curling strips of masking tape and sundry sculpted paper were amplified a-hundred-fold in an illusion of high relief.

The maquette is full of the riotous exuberance that marks his Moby Dick series and seems light years from those extraordinarily reductive paintings that banish illusionistic space or a narrative. There is something of a narrative here, but Stella likes to point out it is as much an homage to the great abstract expressionist painters as a metaphor for Melville’s themes of intangible, unreachable greatness. Ultimately perhaps, the maquette is as Stella likes to say, “art that doesn’t have to make sense, except at the end, when it’s over…You do have to look back and say, ‘Does it hold together, does it fit, does it work, does it make sense?’ (Wallace, Robert K., Frank Stella’s Moby Dick: Words and Shapes, University of Michigan Press 2000)

Today, despite suffering the privations of exposure and time, the impression of the Dusk mural remains one of magnificence of scale and breadth of imagination — all of it, inspired by Stella’s fixation on creating art that serves to keep abstraction vital and relevant. Stella himself suggested the mural would last ten years. It has been twenty. Unless repainted, it will be lost forever. If so, only the maquette will remain to mark its time and place in the annals of important public art installations of the twentieth century. 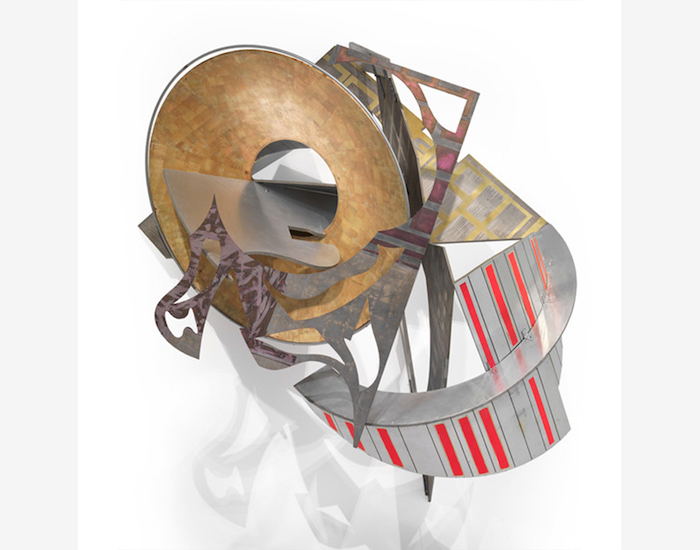 “Frank Stella: Selections from the Permanent Collection” May 5-September 15, 2019, LACMA 1979 exhibition of Frank Stella’s maquettes at the Museum of Modern Art, New York