Perls Gallery, New York
Private Collection, acquired from the above
Back
“Above all, art should be fun.” – Alexander Calder

Alexander Calder executed a surprising number of oil paintings during the second half of the 1940s and early 1950s. By this time, the shock and inspiration of his 1930 visit to Mondrian’s studio had developed into an artistic language of Calder’s own. So, as Calder was painting The Cross in 1948, he was already on the cusp of international recognition and on his way to winning the XX VI Venice Biennale’s grand prize for sculpture in 1952. Working on his paintings in concert with his sculptural practice, Calder approached both mediums with the same formal language and mastery of shape and color.

As an inveterate student of mechanical engineering, Calder was deeply intrigued by the unseen forces that keep objects in motion. Taking this interest from sculpture to canvas, we see that Calder built a sense of torque within The Cross by shifting its planes and balance. Using these elements, he created implied motion suggesting that the figure is pressing forward or even descending from the skies above. The Cross’s determined momentum is further amplified by details such as the subject’s emphatically outstretched arms, the fist-like curlicue vector on the left, and the silhouetted serpentine figure.

Calder also adopts a strong thread of poetic abandon throughout The Cross’s surface. It hints of his good friend Miró’s hieratic and distinctly personal visual language, but it is all Calder in the effective animation of this painting’s various elements. No artist has earned more poetic license than Calder, and throughout his career, the artist remained convivially flexible in his understanding of form and composition. He even welcomed the myriad interpretations of others and would have been pleased to hear that this so-called “Cross” might be perceived as the abstract outlines and features of a face hovering upon a dynamic solar radiance, set within an ovoid-shaped feature suggesting a godhead.

Either way, it is important to remember that The Cross was painted shortly after the upheaval of the Second World War. The painting is not so much a reflection of the artist’s “damn-it-all gaiety,” which is readily found in Calder’s gouache works, and more so a sobering account of the time. Most of all, The Cross proves that Alexander Calder loaded his brush first to work out ideas about form, structure, relationships in space, and most importantly, movement.

Inquire
“The sense of motion in painting and sculpture has long been considered as one of the primary elements of the composition.” – Alexander Calder 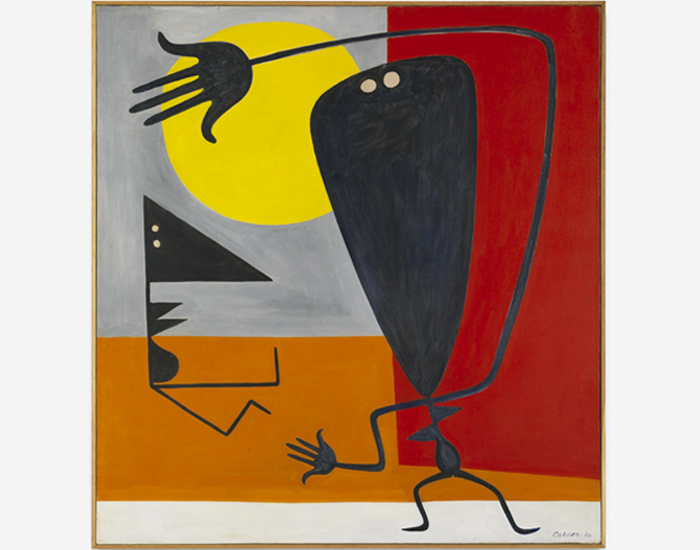 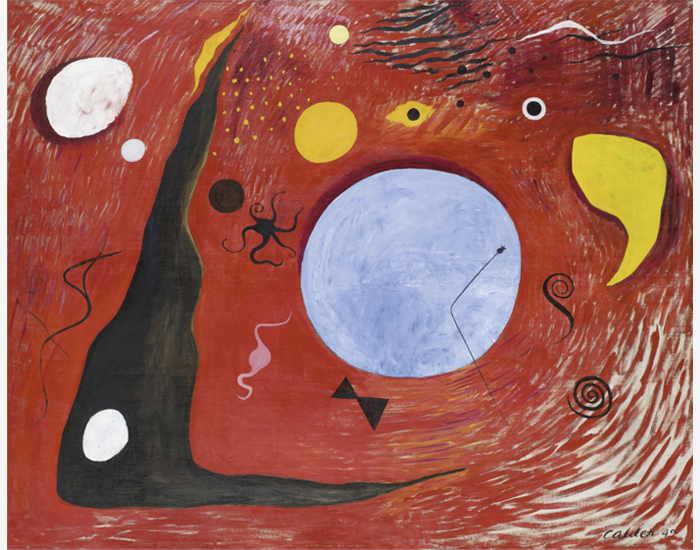 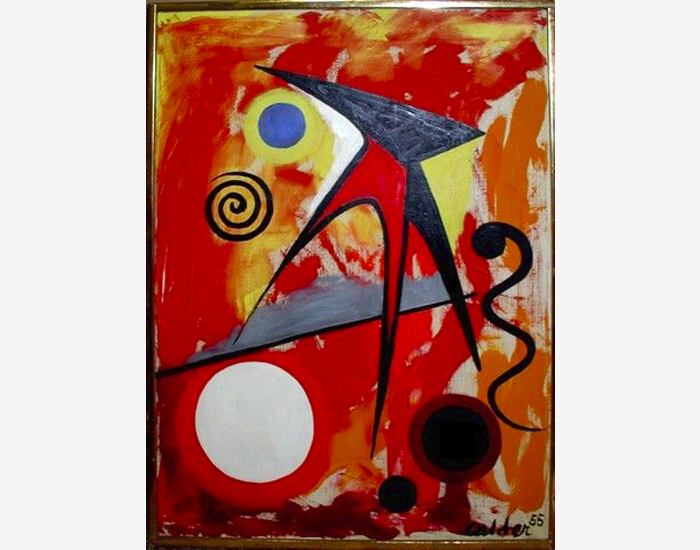 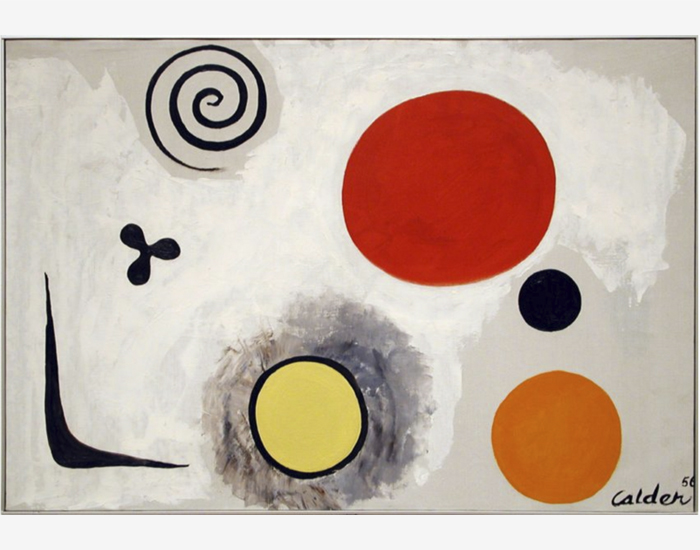 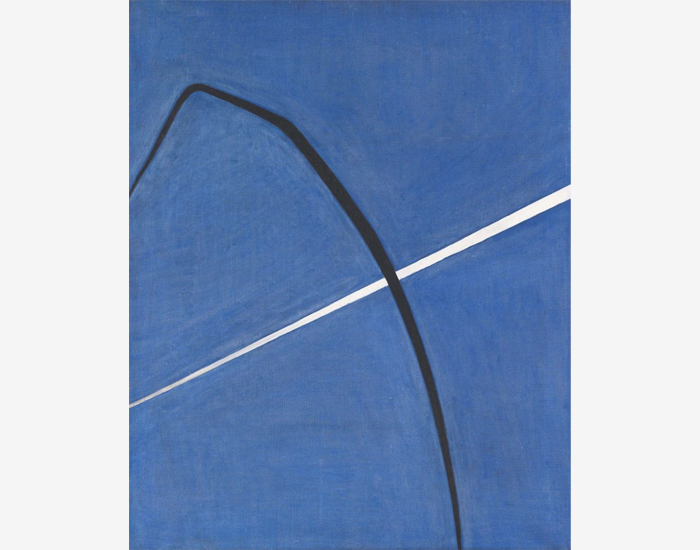 Untitled (1930), oil on canvas, 32 x 26 in.
“If you can imagine a thing, conjure it up in space then you can make it… The universe is real but you can’t see it. You have to imagine it. Then you can be realistic about reproducing it.” – Alexander Calder See the world’s largest permanent display of works by Calder, in the National Gallery of Art’s newly designed East Building. Calder Around the World

Use the Calder Foundation’s interactive map to explore the world through Calder’s art. 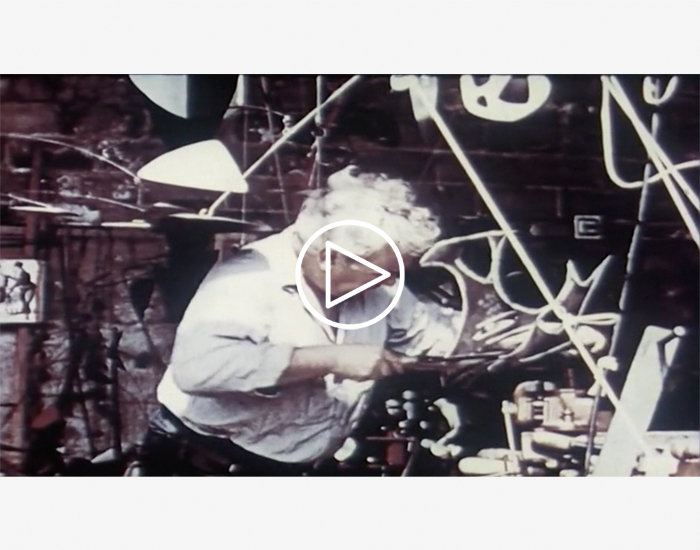 See Calder at wok in this 1950 film produced by New World Film Productions for the Museum of Modern Art. See SFMOMA’s exhibition of Calder’s works, on view through May 2023.

Other Works by Alexander Calder