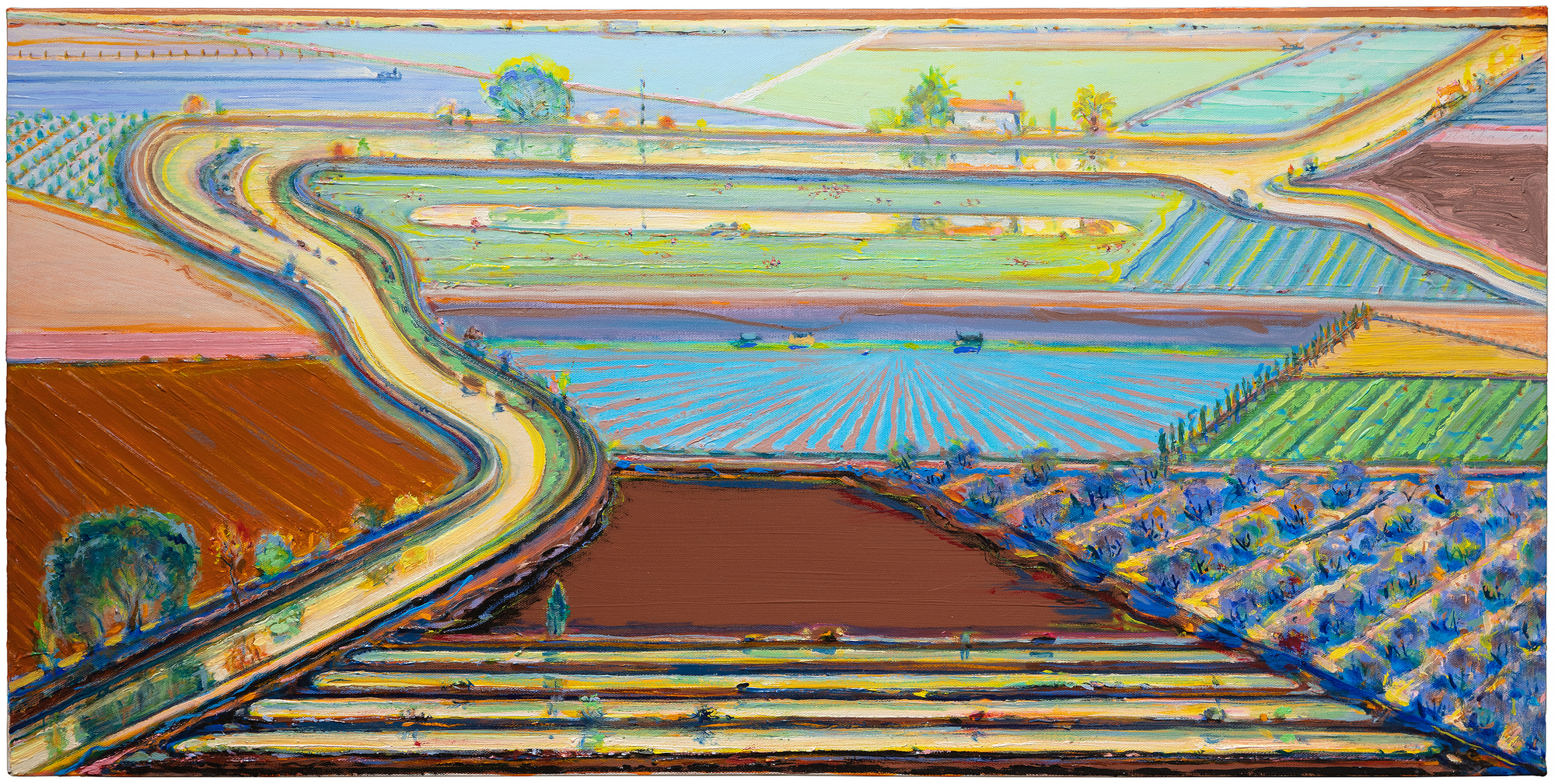 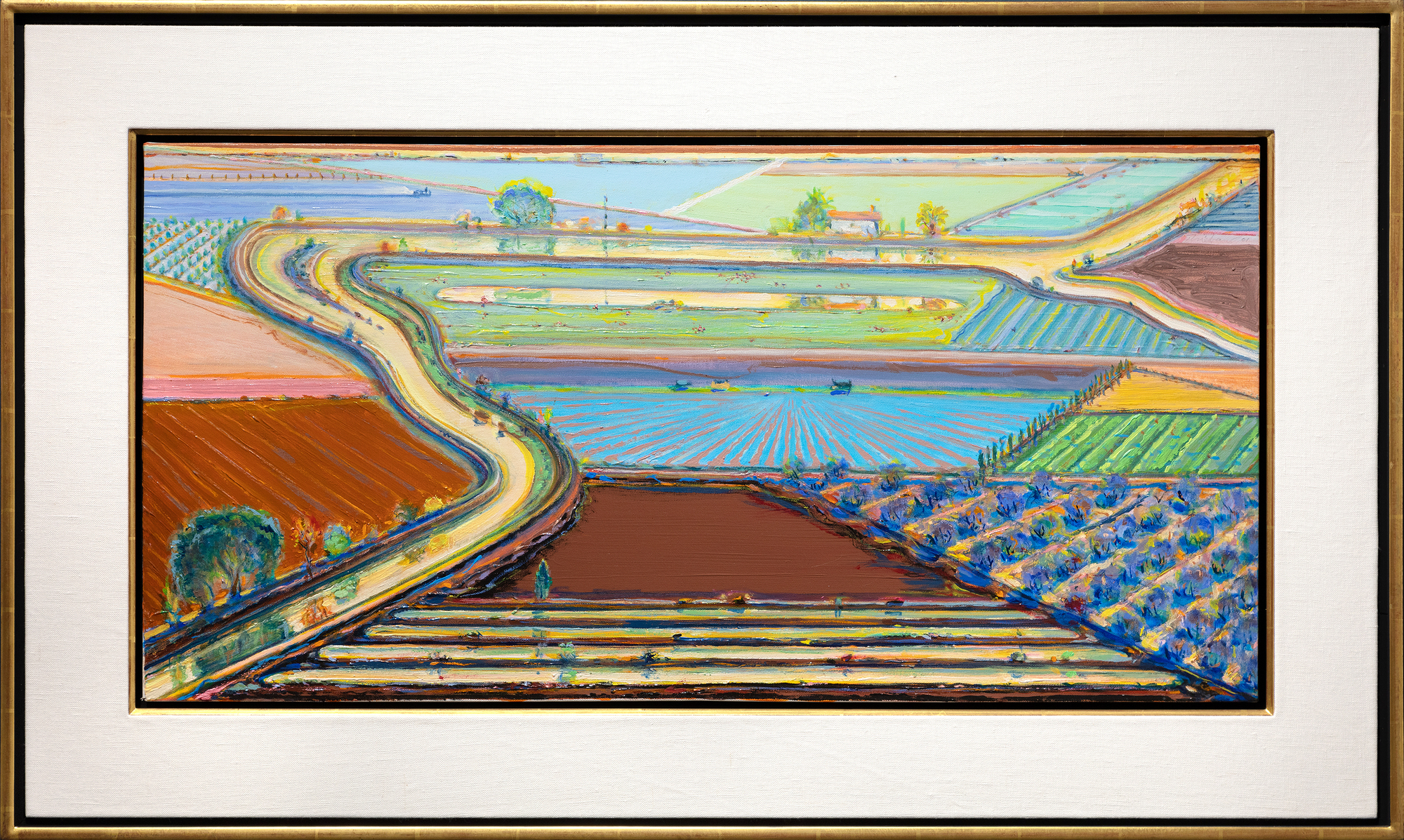 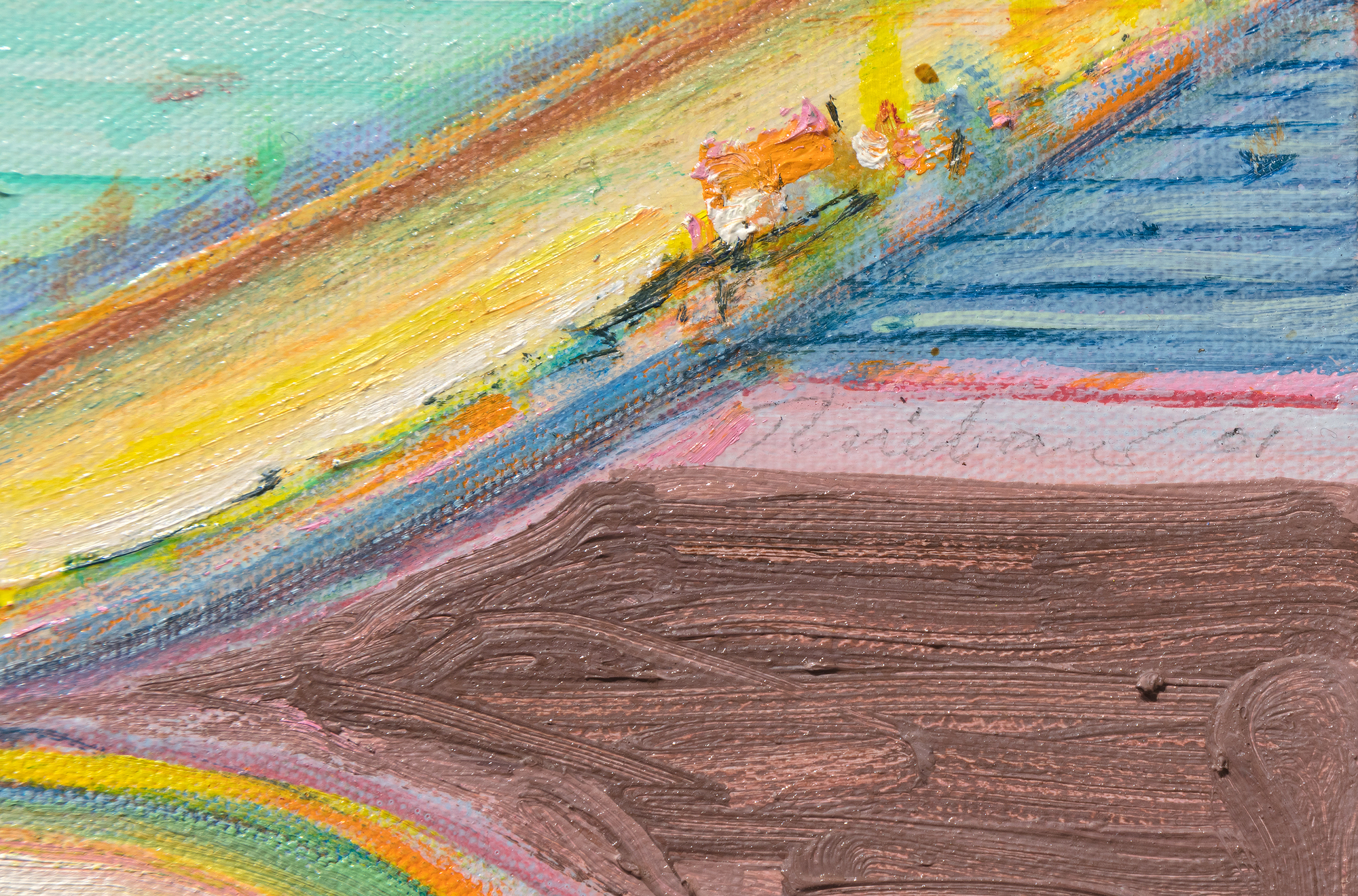 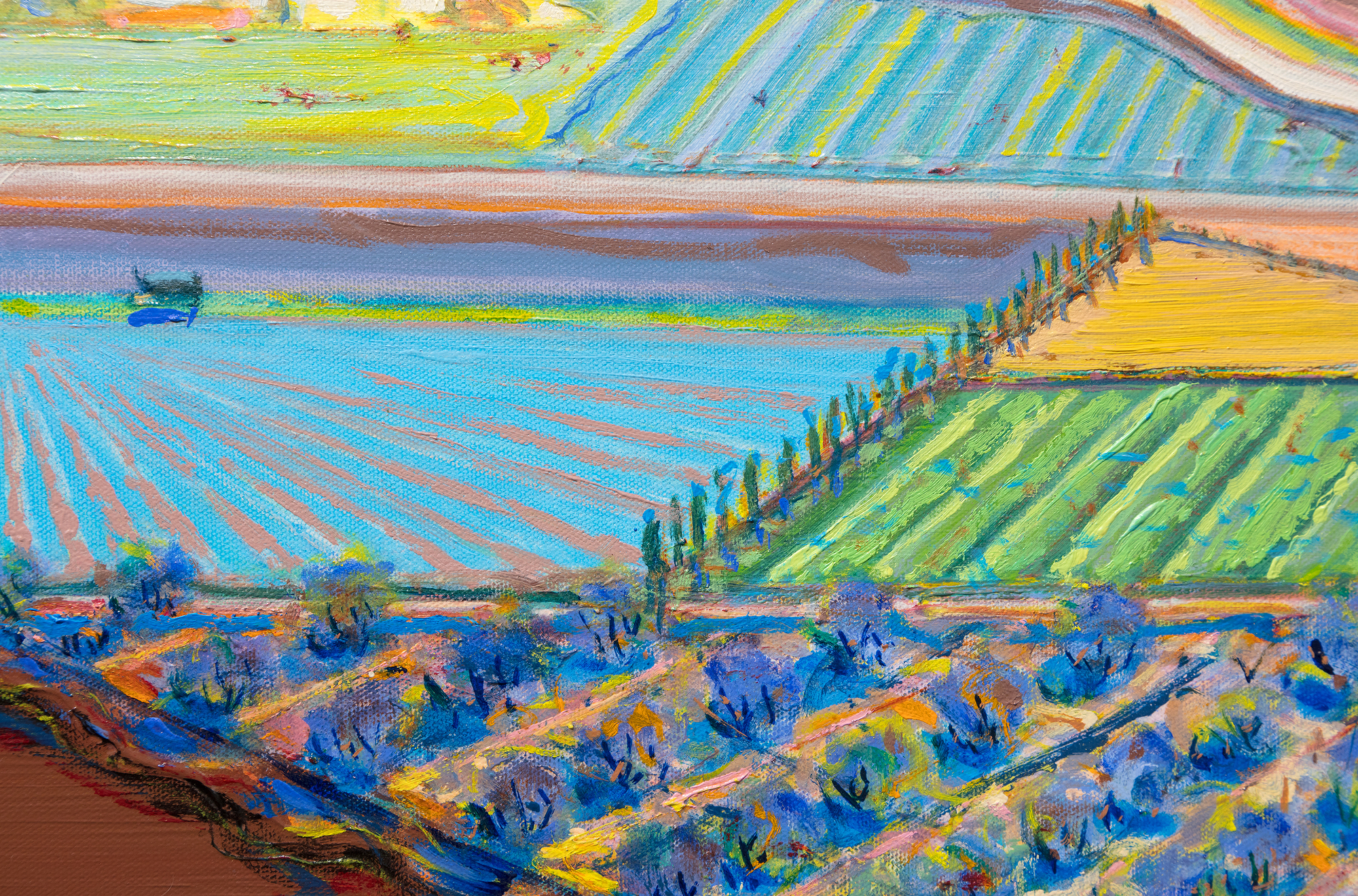 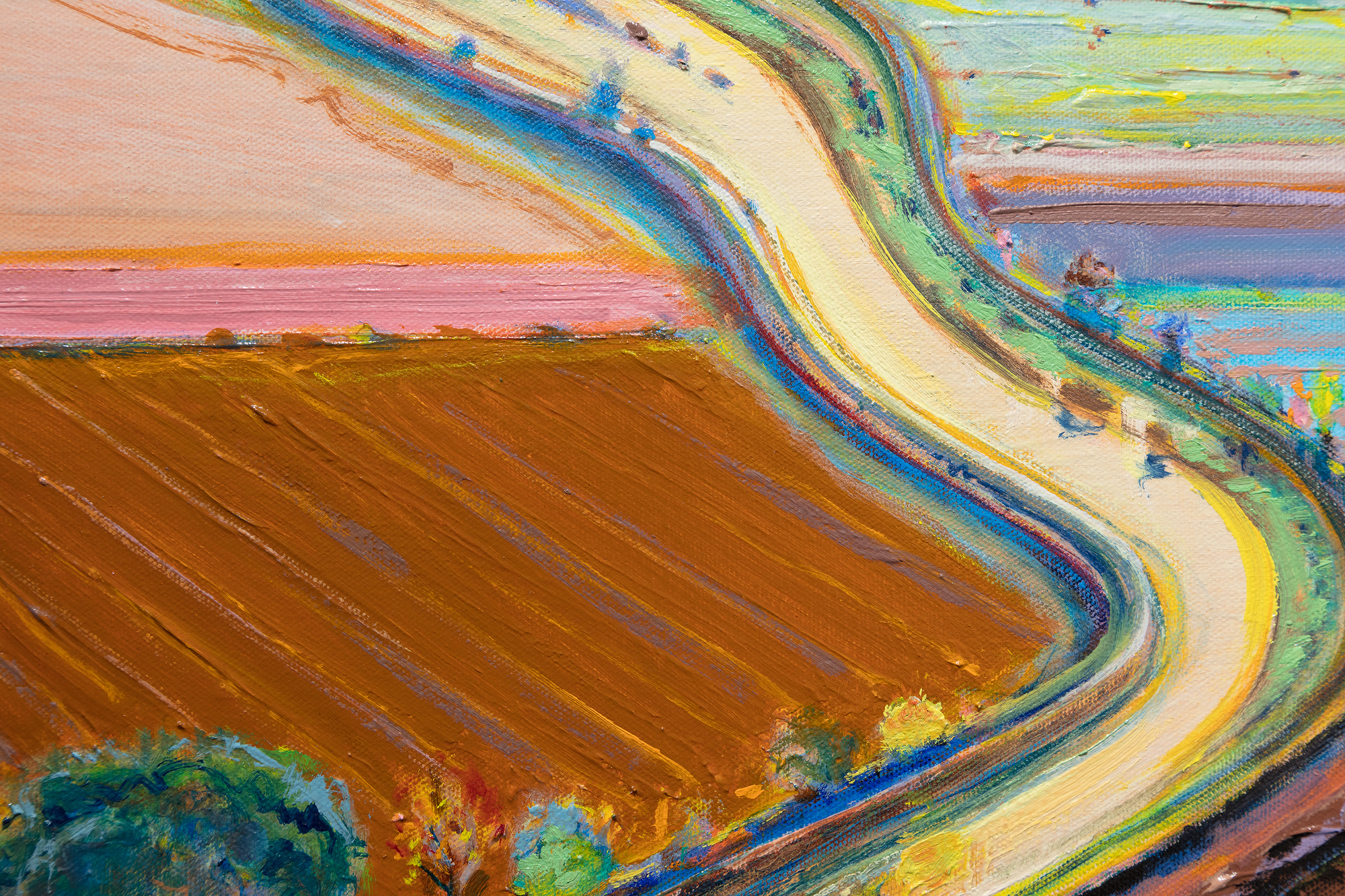 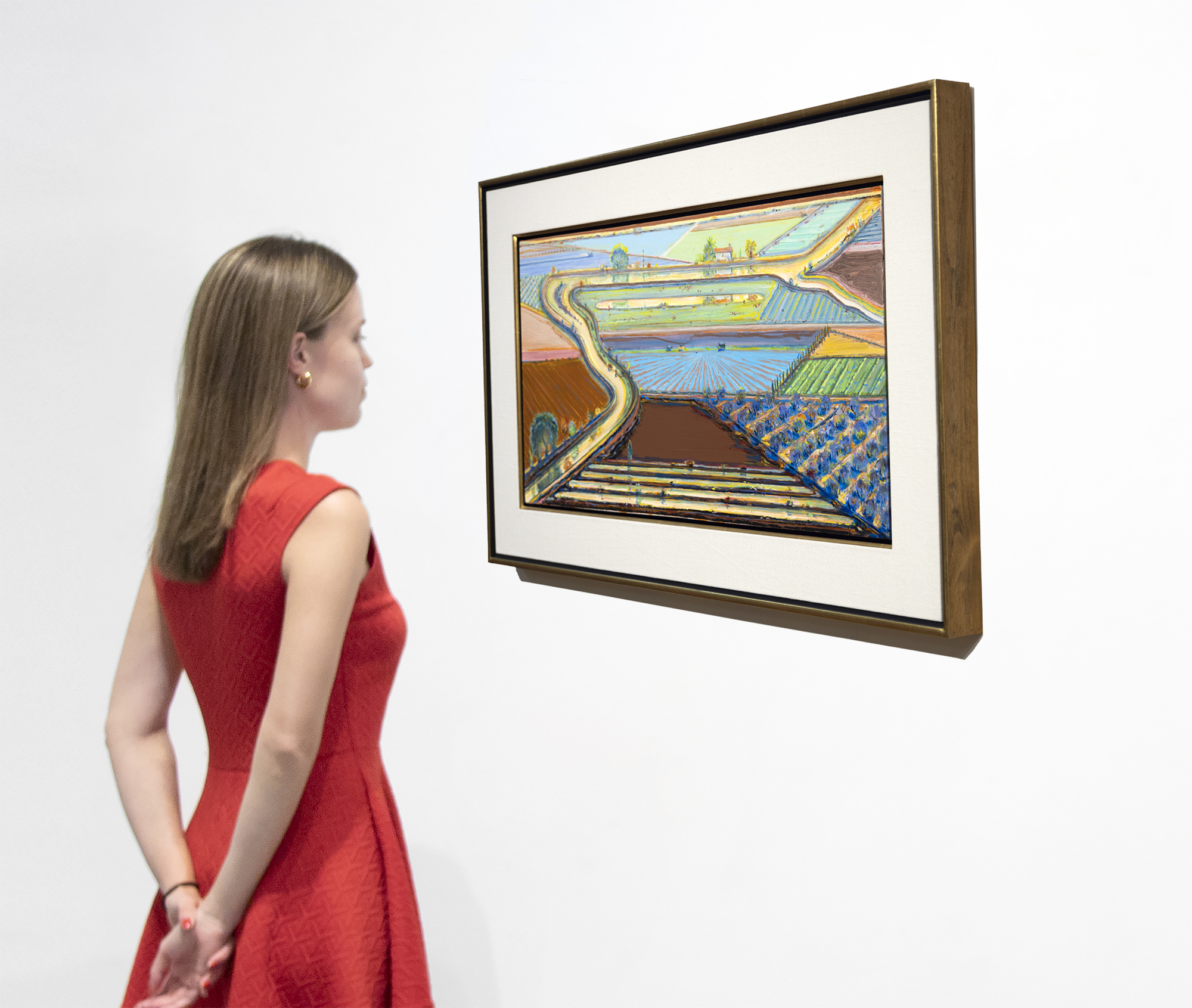 Jonathan Novak Contemporary Art, acquired directly from the artist
Private Collection, acquired from the above

Rubin S. G., 2007, Delicious : The Life & Art of Wayne Thiebaud, Chronicle Books, ill. Pg. 18
Back
“The wonderful patterns and design motifs that crop up in agriculture fascinate me.” – Wayne Thiebaud

When forty rural Sacramento Delta landscapes by Wayne Thiebaud were unveiled at a San Francisco gallery opening in November 1997, attendees were amazed by paintings they never anticipated. This new frontier betrayed neither Thiebaud’s mastery of confectionary-shop colors nor his impeccable eye for formal relationships. Rather, his admirers were shocked to learn that all but seven of these forty interpretations had been completed in just two years. As his son Paul recalled, “the refinements of my father’s artistic process were ever changing in a chameleon-like frenzy.” The new direction had proved an exhilarating experience, each painting an affirmation of Wayne Thiebaud’s impassioned response to the fields and levees of the local environment he dearly loved.

Viewed from the perspective of a bird or a plane, The Riverhouse is an agrarian tapestry conceived with a kaleidoscopic range of shapes and simple forms; fields striped with furrows or striated fans, deliriously colored parallelograms and trapezoids, an orchard garnished pizza-shaped wedge, and a boldly limned river, the lifeline of a thirsty California central valley largely dependent upon transported water.

The Riverhouse is a painting that ‘moves’ between seamlessly shifting planes of aerial mapping that recalls Richard Diebenkorn’s stroke of insight when he took his first commercial flight the spring of 1951, and those partitions engaging a more standard vanishing point perspective. Thiebaud explained his process as “orchestrating with as much variety and tempo as I can.” Brightly lit with a fauve-like intensity, The Riverhouse is a heady concoction of vibrant pigment and rich impasto; one that recalls his indebtedness to Pierre Bonnard whose color Thiebaud referred to as “a bucket full of hot coals and ice cubes.” Among his many other influences, the insertion of objects — often tiny — that defy a rational sense of scale that reflects his interest in Chinese landscape painting.

As always, his mastery as a painter recalls his titular pies and cakes with their bewitching rainbow-like halos and side-by-side colors of equal intensity but differing in hues to create the vibratory effect of an aura, what Thiebaud explained “denotes an attempt to develop as much energy and light and visual power as you can.” Thiebaud’s Sacramento Delta landscapes are an integral and important part of his oeuvre. Paintings such as The Riverhouse rival the best abstract art of the twentieth century. His good friend, Willem de Kooning thought so, too. 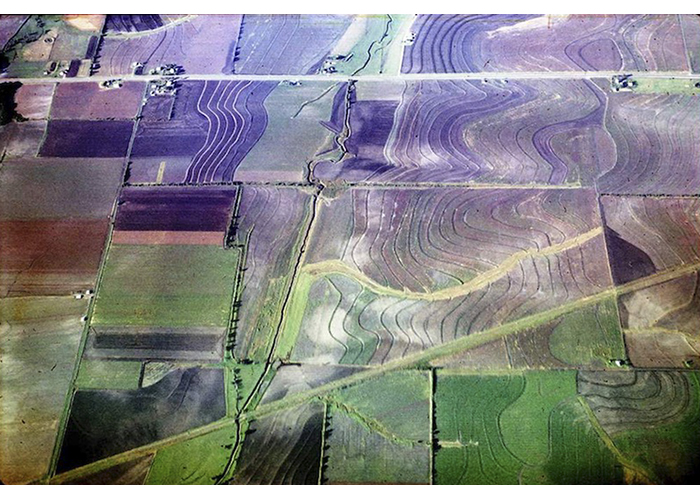 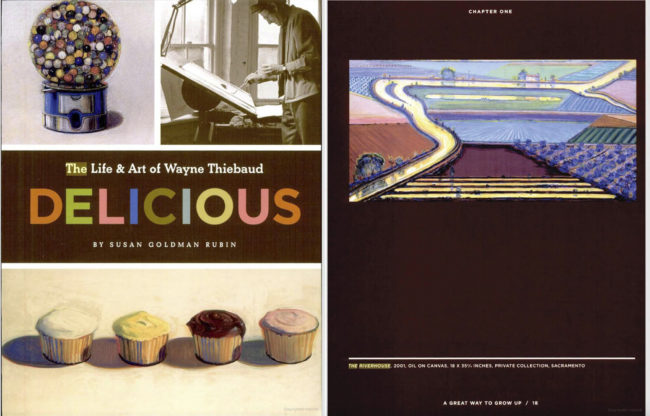 Among the most refined painters of his generation, Thiebaud was prone to making constant adjustments to his paintings. In 2005 the painter re-engaged The Riverhouse, which had originally been completed in 2001 because he knew there was much more radiance and vibratory effect to be gleaned. An image of the first iteration of Riverhouse from 2001 can be found as a full-page illustration in the catalogue, Delicious: The Life & Art of Wayne Thiebaud, by S. G. Rubin. The present example, full of lovely radiance, shows the results of Thiebaud’s revisionary painting.

“I was a spoiled child. I had a great life, so about the only thing I can do is to paint happy pictures.” – Wayne Thiebaud 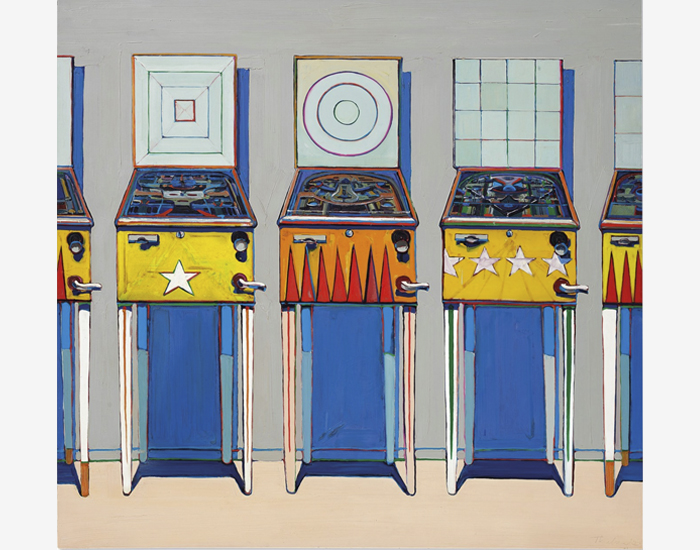 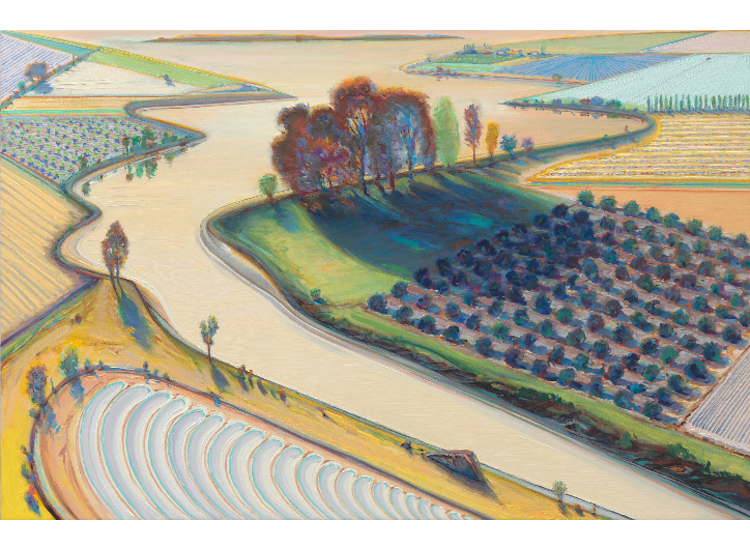 “River Intersection” (2010), oil on canvas, 48 x 36 in.
“I’m not just interested in the pictorial aspects of the landscape – see a pretty place and try to paint it – but in some way to manage it, manipulate it, or see what I can turn it into.” – Wayne Thiebaud 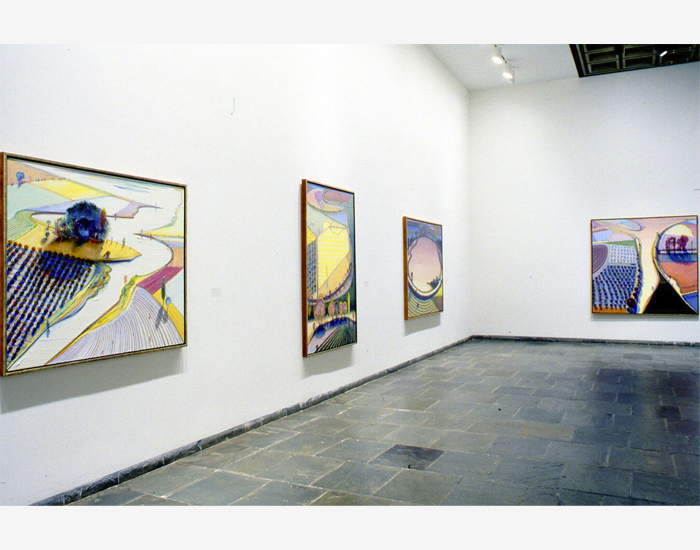 Watch and listen to Wayne Thiebaud share the formative impact that Rosa Bonheur’s “The Horse Fair” (1852-55) had on him as a young child. Smithsonian American Art Museum Senior Curator, Virginia Mecklenburg discusses Thiebaud’s place as “one of the giants of our generation of artists.” Associate Director and Chief Curator of the Crocker Art Museum takes you through the museum’s 2020 exhibition “Wayne Thiebaud 100.”