Heather James presents a rare opportunity to take a different look at Alexander Calder, one of the most important artists of the 20th century. Central to the exhibition is a collection of gouaches painted by Calder in the last decade of the artist’s life. Despite the different medium, these works show Calder in full command of his distinctive artistic language.

Although renowned for his innovative and groundbreaking sculptures, Calder started his artistic career as an abstract painter, preferring to use gouache. What is gouache? A type of opaque watercolor, gouache is a water-soluble paint. Watercolor and gouache both allow the artist to paint quickly, but both are also extremely unforgiving mediums as they dry quickly and are difficult to rework. However, unlike watercolor, which has a translucent appearance, gouache contains white pigment, rendering the color solid. Calder valued gouache for exactly these reasons – that it dries quickly but he could wield bolder colors.

In the 1920s, Calder began to experiment with sculpture. Despite being three dimensional, many of his sculptures appear to be like drawings in space. From his early wire sculptures to the more renowned mobiles and stabiles, there is a sense that the occupy both two dimensional planes and three-dimensional space. By the 1940s and ‘50s, Calder had become so popular as a sculptor that he largely left painting behind, concentrating on creating the kinetic sculptural vocabulary for which he is known. Toward the end of his life, however, Calder returned to the more intimate and less physically involved process of gouache painting in earnest.

As he returned to gouache painting, now with a lifetime of experience as a sculptor, Calder began to transcribe the three-dimensional vocabulary of sculptural forms he had developed onto the two-dimensional surface of the paper. Rounding out the show are intimate sculptures, also completed late in his career. Having both the paintings and the sculptures side by side from the same period, we can see the complementary ideas that Calder expresses and the different forms they take.

Certain shapes and color recur throughout his gouaches and sculptures. Circles, ovals, and other geometric forms dominate the space. There is the same sense of energy and fluidity. The shapes don’t just sit on the surface but vibrate giving a feeling of movement in contrast to the static nature. Like his sculpture, the gouache works echo Mondrian’s bright palette of primary colors and the whimsical nature of Miro’s work, both artist’s that Calder admired greatly.

In bringing his gouaches and sculptures together, the exhibition is not showcasing two disparate parts of Calder’s artistic process but rather complements of each other. The show gives a fuller picture of the unique vocabulary that Calder employed to explore the same themes of color, movement, and spatial enquiries from different perspectives. 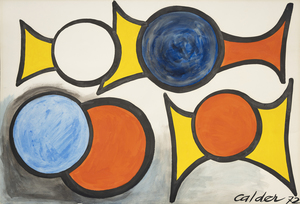