Using a quote by Andy Warhol as its title and inspiration, “Everyone Needs a Fantasy” explores the power, the desire, and the pleasure of Pop Art. The exhibition covers over three decades of Pop Art. Dive into a world of Warhol, Roy Lichtenstein, Mel Ramos, Larry Rivers, Tom Wesselmann, and more.

The works in “Everybody Needs a Fantasy” delve into both the glamour and the hidden edge of American Pop Art. In stark contrast to Abstract Expressionism that became the dominant style by the 1960s, the Pop Art movement offered a sunnier if no less thoughtful alternative. To see the contrast and similarities between Pop Art and Abstract Expressionism, visit our other exhibition, “Jewish Modernism Part 1”.

Despite its brightness, Pop Art offered insightful looks into the American psyche. For example, not just fascinated by celebrity and fame, Warhol explored further into these themes to reflect back onto America its own vision – the beautiful, the bright, and the traumatic.

For Mel Ramos, Tom Wesselmann, and Larry Rivers, their works ask us to consider the role of the human figure within art history, Pop Art, and consumer culture. Pop Art became the space to combine seriousness and camp, the avant-garde and the kitsch.

As the title of the show hints, Pop Art provides both fantasy and reality in equal measure where pleasure is one purchase away.

The most pre-eminent of Pop Artists, Warhol created works that were, to paraphrase Oscar Wilde, at once surface and depth. Judy Garland in the Blackglama ad highlights both desirable fantasy and tragic reality. The exhibition presents a complete suite of his Electric Chair prints – derived from his Death and Disaster series – exemplifying his occupation with fame and infamy in America.

Along with Warhol, Lichtenstein came to define Pop Art and American Art of the 20th century through his appropriation of comics in both subject and style. Lichtenstein reproduced the precision of their compositions that both documented and parodied. His work was heavily influenced by popular advertising and, coming full circle, has inspired mainstream advertising – a consuming cycle of desire.

Jim Dine’s works meditate on objects with childlike appeal to find a universal and nostalgic language. Dine’s robes are among the most recognizable images to have emerged from his long and illustrious career. The use of the lead plumb also speaks to Dine’s own childhood experience with tools and hardware expressed through a Pop lens.

Alex Katz is a pivotal figure in American figurative art. His colorful, stylized, flat portraiture and paintings stand in stark contrast to the Abstract Expressionism in which he came of age. Not quite minimalist, his deadpan figures have qualities that also lends comparisons to pop culture and commercial design. Katz’s works give both the sense of cool detachment but also cool hipness.

American artist Robert Rauschenberg helped to revolutionize art in the 20th century through his assemblages incorporating found objects and pop culture. The layering of objects and meaning questioned the very idea of art and its boundaries.

James Rosenquist is one of the most prominent of Pop Artists. His large-scale canvases feature collaged images culled from advertising and commercial culture. Trained as a billboard painter, Rosenquist used this experience to create massive canvases that themselves look like the advertisements we encounter in everyday life. Although static, the angular disintegration and rejoining gives us the impression of images flashing at high speed as if channel surfing, driving down a highway of billboards, or even jumping from website to website. It is no coincidence that Andy Warhol called his friend James Rosenquist his favorite artist.

Ed Ruscha is one of the most distinguished American artists due in part for his explorations of the symbols of Americana and the relationship between language and art. The End is a cinematic theme that the artist used in the 1990s and 2000s, appearing in paintings, prints, and drawings – notably the 1991 large-scale painting at the Museum of Modern Art. Addressing the passage of time and obsolescence, Ruscha makes use of an antiquated typeface and an old cinematic tradition of using text in film.

Ramos often painted female nudes juxtaposed with commercial totems such as Coca-Cola or Del Monte, appropriating and recontextualizing advertisement within American society. We are confronted with visual and savory fantasies. Like his friend Lichtenstein, Ramos tapped into the proliferation of commercial images by providing an interpretation of this optical abundance. Not just referencing cultural touchstones, Ramos incorporated references to classical nudes.

Considered both the godfather of Pop Art and its enfant terrible, Rivers had at one point studied under Hans Hofmann, the father of Abstract Expressionism. It is this training in which Rivers felt compelled to always have the artist’s touch within his works in contrast to Lichtenstein or Warhol who favored industrial or factory techniques to erase. Nevertheless, his works pushed the boundaries of art by fusing abstraction and figuration with pop and consumer culture.

Segal’s focus on the human body in life size helped push against the prevalence of Abstract Expressionism. Moreover, these casts made of bandages of friends and family, have an existential resonance. People suspended in time in actions that have no end and no beginning. Born into a Polish Jewish family, many of whom died in the Holocaust, Segal creates figures that are literal shells, reminders of the human condition.

Like Ramos, Tom Wesselmann’s work references the classical nudes of art history which he then juxtaposed with modern objects. He even updated the nude for contemporary audiences, such as using bikini tan lines. Where Ramos brings a realism to his figures, Wesselmann provides a vibrant graphic style. This push to abstraction creates an even bolder connection between visual and commercial consumption. 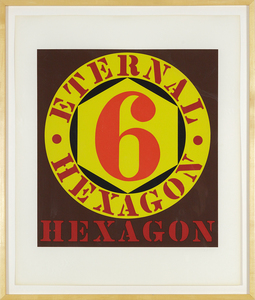 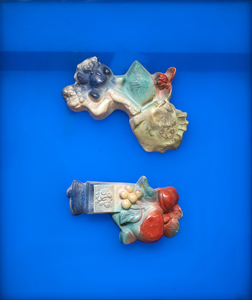 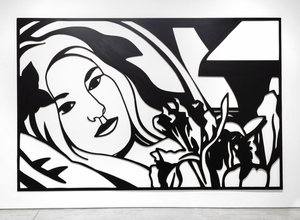