Heather James Fine Art presents a virtual exhibition that re-examines the threads of Surrealism. Beyond the core artists of the movement, the show spirals out to look at its influences and the unique ways artists have harnessed its visual language for other purposes.

Surrealism emerged after the wreckage of WWI, influenced by psychoanalysis. Meaning “beyond reality”, Surrealism rejected a rationalist view of the world. Instead, these artists mined the human subconscious, placing primacy on dreams and unconscious or hidden tensions. Sigmund Freud’s work in revealing the complex inner works of humans heavily shaped surrealism.

The exhibition includes some of the most important and recognizable names of the movement including Francis Picabia, Max Ernst, Salvador Dalí, and Rene Magritte. But, it is with some of the other members including Roberto Matta, Joan Miró, and Leonora Carrington that Surrealism’s possibilities open up.

Born in Chile, Matta worked for two years in modern architect Le Corbusier’s studio in Paris. He also formed strong friendships with Salvador Dalí and Andre Breton, officially joining the Surrealists in 1937. His paintings incorporate psychological responses to political and social concerns, hallmarks of Matta’s paintings influenced by the impact of World War II. They also contain his classic style of numerous, overlapping architectural planes. Matta deftly merges his surrealist background with the visual language of the Abstract Expressionists.

Through a keen eye, Joan Miró created a unique visual language that is recognizably his. The landscape of his native Mont-roig in Catalonia and latter Majorca influenced his work as he populated his canvases with surreal biomorphic elements. As the title suggests, the painting in the exhibition hints at a bird, an insect, and even a heavenly constellation. There is whimsy and joy to Miro’s works. The pared back forms, carefully chosen color palette, and sense of spontaneity influenced not only his fellow Surrealists but also Abstract Expressionists.

Ernst was a pioneer of both Surrealism and Dada. This painting exemplifies all of his hallmarks and as such creates important connections to the other artists in the exhibition such as Miró’s biomorphic paintings or Matta’s architectonics.

For other artists like Alexander Calder, Marc Chagall and Joseph Cornell, though never formally a member of the Surrealists, their works had a profound effect on the movement. André Breton said of Chagall’s oeuvre, “no work was ever so resolutely magical”.

At the same time, artists like Irving Norman or Donald Roller Wilson sought to have a wider impact on society and culture. Norman is associated with “Social Surrealism.” His paintings are highly detailed dystopian scenes carrying messages not of hopelessness, but of motivation to effect change.

Donald Roller Wilson’s paintings straddle the line between Surrealism and Postmodern irony. They are beautifully absurd works in search of meaning. Wilson points out, “You can make a profound intellectual statement just by basing your efforts on silliness.”

The exhibition concludes with contemporary artists who continue the same thread of inquiry as the Surrealists. From John Stezaker’s unusual photographic collages to Gert and Uwe Tobias’s blend of European folk, Surrealism touches our visual culture. William Wegman even pays homage to the great surrealists. Wegman’s photographs are already surreal in their use of anthropomorphic dogs but he pushes this connection in several works like “Double Portrait” or “Dog House” which are part of his Man Ray Portfolio.

More than just revealing the subconscious, this exhibition highlights how Surrealism has been a tool and vehicle for artists to explore social and political issues, that it can be filled with whimsy or with passion. Surrealism is not just beyond real, it is all around us. 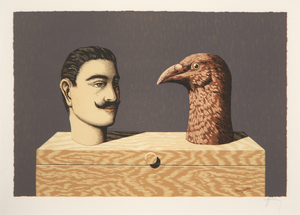