Heather James presents a two part online exhibition of artworks from our collection featuring the modernism developed by Jewish artists.

Part 1 focuses on the artwork that blossomed following World War II particularly the form of abstraction by these artists. Without taking a reductive approach to the impact of the war, the atmosphere following the deep trauma of the war provided artists room to explore the infinite possibilities of art and identity. Additionally, Jewish art critics like Clement Greenberg and Harold Rosenberg pushed art history into bold new directions.

But does an artist being Jewish make art Jewish? This exhibition is less interested in defining Jewish art but rather focuses on exploring the ways Jewish artists have shaped art. Thus, perhaps the question becomes, how do you look for Jewish influences in abstraction? As Adam Kirsch in The New Republic posits, “In both [modernism and Abstract Expressionism] Jewishness expresses itself by its insistence on its own absence – by the flight into the universal that has always been characteristic of modern Jewish idealism.”

Beginning with Abstract Expressionism, the exhibition showcases work by Adolph Gottlieb and Ida Kohlmeyer. Gottlieb was one of the first generation of Abstract Expressionists and while he stated his personal identity as a Jewish American did not play a role in his painting, he did create the Torah curtain for the Congregation B’nai Israel synagogue that utilized his pictographic style to interpret religious symbols.

Kohlmeyer was one of the preeminent Abstract Expressionists of the American South. She studied under Hans Hofmann and would later teach alongside Mark Rothko, both of whom were also Jewish. Kohlmeyer’s artwork, whether painting or sculpture, is defined by dynamic color and shape influenced by her own particular vocabular of forms and signs. A feature and foundation of art in New Orleans, Kohlmeyer designed the stained-glass windows of the Touro Synagogue.

While Gottlieb and Kohlmeyer developed the Abstract Expressionist movement, Roy Lichtenstein became a pioneer of Pop Art. Lichtenstein’s Jewish identity influenced his art in more indirect ways whether it was the subtle housing discrimination he faced while growing up or his joining a Jewish fraternity. Much more direct but still subtle, were the Jewish influence of the comic books that defined the artist’s style. The artists for these comics were often Jewish including Jack Kirby and Irv Novick.

For Lichtenstein’s fellow Pop artist, Jim Dine, his Jewish identity played a central role in shaping his life which he expressed in his book and autobiographical poem, “Jewish Fate”. His artwork has also touched on these themes, particular his childhood memories of growing up in his grandfather’s hardware store. The work in this exhibition subtly hints at this through the use of the plumb bob.

Louise Nevelson moved to the U.S., a Jewish immigrant from Russia (now Ukraine) fleeing the abuse aimed at the Jewish communities. While other artists during the 1940s picked up steel as a medium, Nevelson consciously moved away from the material as it put her mind to the war. Instead, in a subtle political act, she turned to wood for her sculptures. 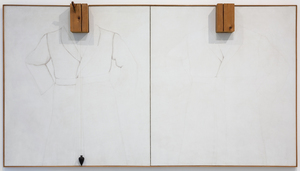 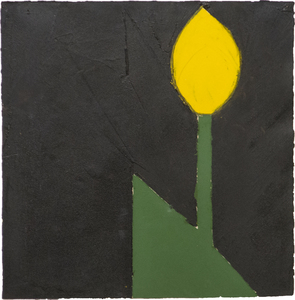