More to Life: Impressionist Dialogues from Monet and Beyond

Heather James Fine Art presents an eclectic survey of French and American Impressionism, exploring their origins but more importantly, the dialogues between artists, between movements, and between artist and subjects.

MAPPING THE COURSE OF THE MOVEMENT

In the mythologizing of art history, Impressionism landed like a lightning bolt. Not only in visual language, the art movement upended what subject matter was depicted. Painting “en plein air” (in plain air outdoors) and influenced by the radical perspective of Japanese woodcuts, the Impressionists captured the changing landscape as France became industrialized. With a growing middle class, the artists found both new subjects and new clients to purchase their works.

With works ranging from 1872 to c. 1945, the show illustrates how the Impressionist movement developed over time. Beginning in 1872 with Claude Monet’s “L’Ancienne rue de la Chaussee, Argenteuil” the exhibition captures Impressionism’s early sentiments. 1872 was an important year for the French Impressionists as it was when the first of their eight exhibitions took place and the genre’s identify took form. In fact, the piece of art that gave Impressionism its name, “Impression, Sunrise” was painted in the same year and the same town of Argenteuil.

As the tenants of Impressionism spread, other artists were inspired to apply these principles to their own settings. As the US expanded West, so did Impressionism, eventually finding the beautiful scenery of the Pacific coast with works by the California Impressionists, such as William Wendt’s “Laguna Hills”. “The Case for Impressionism” from The Art Assignment Perhaps one of the best relationships to capture the supportive spirit among these painters is the friendship between Monet and Sisley.

Painted in 1872, “L’Ancienne rue de la Chaussee, Argenteuil” depicts the important town of Argenteuil where Claude Monet spent six years honing his craft. Other Impressionists including Monet’s friend Alfred Sisley would spend time in the hamlet. In fact, Monet and Sisley would paint side-by-side including this street scene of Argenteuil. Sisley’s version is now in the esteemed Musée d’Orsay in Paris. Both artists captured a moment in which the rural nature of the Argenteuil holds out against the looming industrialization.

Continuing this theme of artistic conversation, the exhibition features the stunning “L’Eglise de Moret, le Soir” by Alfred Sisley. The work is part of Sisley’s important series featuring the Church of Notre-Dame in Moret-sur-Loing. It is similar to Monet’s famous Rouen Cathedral series, painted in 1892-93 and reworked in 1894. Both artists depicted churches at different times and in varying weather. However, Sisley’s portrayal is more architectural and better captures the interaction of building to light and weather. While Monet would later rework his take on this subject, Sisley accomplished his objective in one go. A deeper conversation on these important works can be found in our page “Cathedral Paintings of Alfred Sisley and Claude Monet”.

CONVERSATIONS BETWEEN ARTIST AND LANDSCAPE

The French Impressionists were not just in conversation with each other as they also interacted with the landscape. Camille Pissarro painted the view out of his apartment, capturing the change of seasons on the Tuileries Garden in Paris. Gustave Caillebotte retired to his estate in Yerres turning out striking paintings of his garden. Beyond representation, each work speaks to the Impressionistic spirit through its depiction of temporality and seasonality. More can be learned about the relationship between Monet and Caillebotte on our page “Gustave Caillebotte’s Garden”. Caillebotte in his garden “The Artist’s Garden – American Impressionism and the Garden Movement”, lecture by Anna Marley at The Art Institute of Chicago The style of Impressionism developed by the French would soon spread to American artists including the expatriates living in France and those still living across the ocean. The Americans would take the tenets of Impressionism – painting outdoors, modern subjects – and adapt them to the specificities of the United States.

While many of the French Impressionists would find themselves in Monet’s home of Giverny, the Giverny Group was not the only art Impressionist art colony. These colonies were central to American Impressionism and its further development, California Impressionism. Artists like William Wendt and Edgar Payne would found the California Art Club and the Laguna Beach Art Association. LBAA is now the Laguna Art Museum.

Perhaps foremost amongst the Americans who did not show at the eight original Impressionist exhibitions are Frederick Carl Frieseke and Childe Hassam. Frieseke was part of the Giverny Group, the colony of artists that congregated around Monet in Giverny. Frieseke would even live next door to Monet, although his primary influence came from Pierre-Auguste Renoir. This can be seen in the dappled light on women at leisure favored by Frieseke.

“Afternoon at the Beach” depicts people at play, a favored subject by both the American and French Impressionists and was commissioned by Rodman Wanamaker for the Shelburne Hotel in Atlantic City. Rodman Wanamaker was the son of department store magnate, John Wanamaker, whose eponymous stores catered to the booming middle class. In addition to being the founder of the PGA (Professional Golfers’ Association), Wanamaker was a dedicated patron of Frieseke, even commissioning him for other murals for the department store. This patronage is a hallmark of Impressionism, reflecting the growing wealth of the upper and middle classes, particularly the industrialists that prospered during the Gilded Age. Explore this relationship in our exhibition “A Beautiful Time: American Art in the Gilded Age”.

It is this subject matter that differentiates “Afternoon at the Beach” from the standard murals. Prior to the Impressionists, murals often depicted events in history (also called “history paintings”) which were considered the highest form of art. The focus on contemporary scenes and on the middle class was revolutionary. Even later muralists like Diego Rivera or N.C. Wyeth would focus on historical events or were didactic in nature. For more about Wyeth’s murals, please visit our exhibition “Meeting Life: N.C. Wyeth and the Met Life Murals”. These giants of art history from Monet to Frieseke did not develop in a vacuum but were in constant conversations with each other, advancing their craft and perspective alongside each other. Radical and revolutionary, the Impressionists were in dialogue amongst themselves, with art history, with their subjects, and with their audience.

“Art, to me, is the interpretation of the impression which nature makes upon the eye and brain.” – Childe Hassam 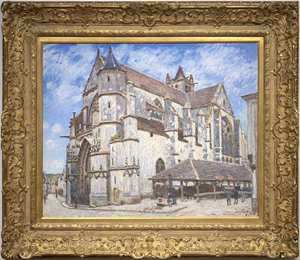