“The serpentine line, or the line of grace, by its waving and winding at the same time different ways, leads the eye in a pleasing manner along the continuity of its variety.”

This online exclusive exhibition pulls across Heather James Fine Art’s collection by following a single thread of inquiry – how have artists utilized the line to push the boundaries of art? The line has always been the starting point for artists. By elevating this simple gesture, the exhibition highlights the infinite possibilities artists have mined.

More than a building block, the line has been used in radical approaches to artmaking. Anchoring the exhibition is Valerie Jaudon’s “Palmyra”. Jaudon was one of the founders of the Pattern and Decoration movement. With a foundation of feminist theory, Jaudon repositioned what were considered trivial art forms and minor visual images. These forms and symbols were relegated because of their association with the feminine or non-Western. In championing pattern making and crafts, Jaudon and other artists in the movement pushed against Western male hegemony. The line becomes a radical tool to revitalize and reveal art.

Carlos Cruz-Diez and Jesús Rafael Soto emerged in Latin America in the Concretism movement, more specifically Op and Kinetic art. For them, the line becomes explorations of perception – visual, cultural, and political. In this same vein, Tony de los Reyes’s “Border Theory” series gives us not only an artistic line, but also a geographic line. How do we interpret boundaries? How do we visualize borders?

While not all lines are political, it does not make them any less radical. One of the most renowned engravers, Albrecht Durer organized lines of different lengths and widths to create etchings of aesthetic and emotional depth. At the other extreme in subject matter and time, Tom Wesselmann’s steel-cut artworks showcase his ability to harness the line into sensuous Pop depictions of the female body.

By placing these artists together, the line emerges as the alpha and the omega, the means to create artworks of expressive resonance or complete unto itself. 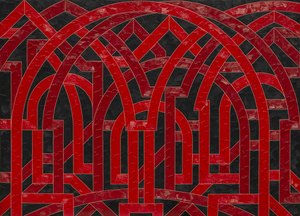