The Rest So Beautiful: Contemporary Art and China

“I want it to be 70 per cent beautiful, 15 per cent surrealistically beautiful, and the rest so beautiful that nobody can bear it.” – Zhang Huan

This virtual exhibition explores a few common themes in contemporary art emerging from China. While no exhibition can confidently map out the art scene in a single country, this show provides an intimate dialogue among the artworks and between object and viewer.

One of the most important and influential artists in the exhibition, Zhang Huan has pushed the boundaries of performance. Through his exploration and use of his body, the artist confronts societal constraints, acceptable behavior, and powerlessness in a rapidly changing world. Zhang was part of the new wave of Chinese avant-garde artists clustered in what the artists termed the Beijing East Village.

Hai Bo, one of the leading photographers in China, mines themes of time and memory and often focuses on people from his hometown of Changchun. Often without visual clues to time or place, some of his photographs blur temporal and physical space, lending an air of surreal timelessness. In others, his work directly confronts the passing of time and the complications of conformity and individuality.

Like Zeng’s Western influence, Zhu Yi Hong and Jiang Guofang are influenced by European Old Masters to create portraiture focused on women in traditional clothing and lost in deep meditation.

In the same vein, Xiaoze Xie paints still lifes and tableaus brimming with quiet observations of life. His deftly worked oil paintings often focus on books and other printed media to contemplate what these items represent – knowledge, ideas, beliefs, and ideology.

Jiao Xingtao also focuses on everyday objects in his artwork. His meticulously observed and hyper-realistically recreated artworks speak to the increase of consumerism and excess. Emphasizing the packaging, his artworks critique the ephemerality of luxury and everyday goods and the slippage in meaning when culture places more importance on packaging than the object’s substance.

Rounding out the show is Yang Maoyuan, whose series of extinct animals are at once beautiful and solemn. These works serve as a meeting point of the different themes within the show – time, memory, and consumption. 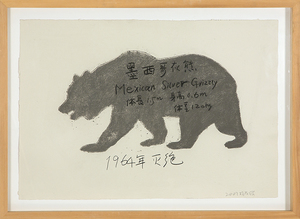