Gustave Caillebotte was integral to the development of Impressionism, but is perhaps its least well-known celebrity. Caillebotte was largely responsible for the success of Renoir, Pissarro, Sisley, and especially Claude Monet. He was able to champion the Impressionists due to a sizeable family inheritance which allowed him to pursue his passions. This luxury was a detriment to commercial success during his lifetime, as his endeavors in painting were often gifted and not sold out of financial need. He died at the age of 45, leaving many art historians to wonder what may have come from another few decades of his development.

Painted in 1877, Vue du Jardin de l’Artiste et de la Vallée de Yerres gives us valuable insight into Caillebotte’s impressionistic development and the genesis of his intimate friendship with Monet. Created one year after Caillebotte’s debut at the Salon in Paris, the scene is the artist’s garden at the family estate at Yerres, a river village south of the city. It was here Caillebotte would experiment with a more impressionistic stroke than we see in many of his more precise figural or city scenes, perhaps meant to convey bucolic serenity. This painting was originally gifted to Mary Cassatt by the artist and remained in her family for almost 70 years.

We know Caillebotte was acquainted with Monet at this time, having purchased three of his paintings in 1876. It is widely held that at Yerres the friendship between Monet and Caillebotte deepened meaningfully. Both avid gardeners and painters of flowers, their influence on one another is clear in this scene. After this point in 1877, Caillebotte would become a fundamental advocate for Monet’s success, and his sponsorship would even go as far as to pay for Monet’s studio rent at one time. Caillebotte’s paintings are being re-discovered and celebrated in exhibitions such as the 2016 show “Caillebotte: Painter & Gardener” at Thyssen-Bornesmisza Museo Nacional in Madrid, and “Gustave Caillebotte: The Painter’s Eye” at the National Gallery of Art in DC in 2015. His work is held in permanent museum collections worldwide including The Met; MFA Boston; The Louvre and the Museé d’Orsay in Paris.

Inquire
“The very great artists attach you even more to life.” – Gustave Caillebotte 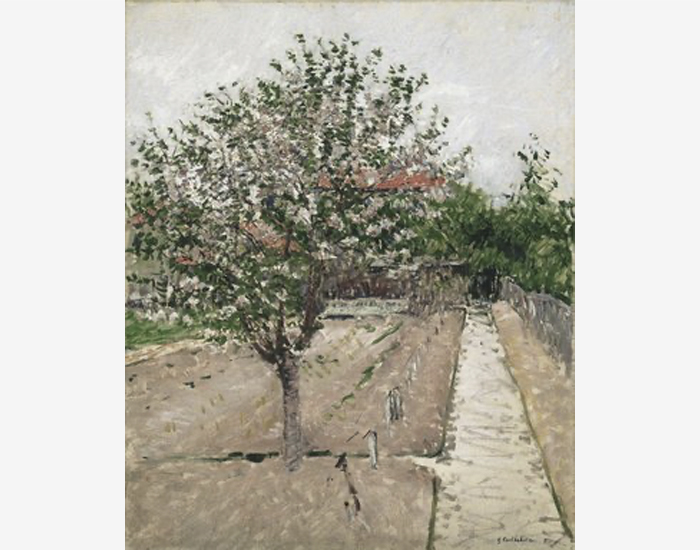 Enjoy a video tour of Caillebotte’s family home in Yerres, which is now open to the public as a museum. Learn more about the Propriété Caillebotte’s 2014 exhibition of Impressionist paintings Caillebotte created in this home. Learn more about the history and details of Caillebotte’s 1877 masterpiece with this video from Khan Academy.