R. Wallace, "Frank Stella's Moby Dick" University of Michigan Press, 1994, page 277, plate 158 (illustrated in color)
Back
“I don’t like to say I have given my life to art. I prefer to say art has given me my life.” – Frank Stella

Frank Stella’s four black enamel painted canvases of simple, deliberately arranged lines unveiled in December 1959 at Dorothy Miller’s 16 Americans exhibition turned the page on the excesses of the Abstract Expressionists and would shift the course of art history. Yet Stella would like to think his greatest impact is his compulsion to go for broke. For six decades and counting, he did just that. But place one of his exuberant, Baroque-inspired wall dependent sculptures from the 1980s or ‘90s next to a tautly painted canvas of that early time and it can be a vexing experience. Yet the trajectory of Frank Stella’s career is not so surprising when one considers his consistent refrain about reimagining materials in an interplay with surface values. When he found the confines of a rectangular canvas restrictive, he built frameworks to support irregular shapes then rebelled by building multi-tiered structures and painting them.

So perhaps the riotous exuberance of The Musket is not so far removed from those extraordinarily reductive paintings of that earlier time. Constructed and painted in 1990 and modeled on a computer, it is a construct of cut, trimmed, bent, and torqued honeycomb aluminum incised and painted in a wide range of fluorescent, metallic and acid colors that explode into low and medium relief.  Cubism and its tenets dominated twentieth-century art, but here Stella seems to have reached in a bag of confetti and tossed handfuls of it in the air in a sweeping gesture, celebrating freedom from that discipline. Its title is borrowed from chapter 123, one of two climactic scenes in Moby Dick that underscore Melville’s profound and intellectual commentary on human nature. The scene provides the pivotal moment when Starbuck realizes it may be his last chance to make the ultimate decision: save the ship and the crew’s lives by killing his mad captain or allow Ahab’s insanity to bring them to a watery death. The Pequod and its crew have passed the disastrous typhoon and have found smooth sailing and although the rest of the crew celebrate their good fortune despite the dark omens, as he enters Ahab’s cabin, in front of him is a rack of muskets, one of which had been pointed at him earlier. Yet he stands frozen in indecision. What will he do?

Moby Dick and Melville provided Stella inspiration for one of the most significant phases of his career. The series lasted from 1986 to 1997 and included paintings, lithographs and sculptures. The Musket is one of over 130 aluminum wall-reliefs inspired by the chapters of that classic American novel — several of which were included in the highly successful retrospective at the Whitney Museum in 2015 through 2016.  The sustaining power of Melville’s thematic material Stella explained as a reflection of his fascination with the author’s attention to “detail…and how he tries to sustain you during the trip and indulge you in the language. It doesn’t have to make sense, except at the end, when it’s over. So, while you’re working your way through it, you do have to look back and say, ‘Does it hold together? Does it fit? Does it make sense?’ But the fact of the matter is that when you construct something like that you’ll never say, ‘Okay, I did it; now forget about it.’ It changes everything. It shifts.”

More
Inquire
“But, after all, the aim of art is to create space – space that is not compromised by decoration or illustration, space within which the subjects of painting can live.” -Frank Stella Explore the Frank Stella retrospective exhibition at the Whitney Museum of American Art in 2015-2016, which featured comparable wall reliefs from the Moby Dick series. The Stella retrospective traveled to the Modern Art Museum of Fort Worth in 2016. Read their feature on the 5 “Moby Dick” pieces on display. 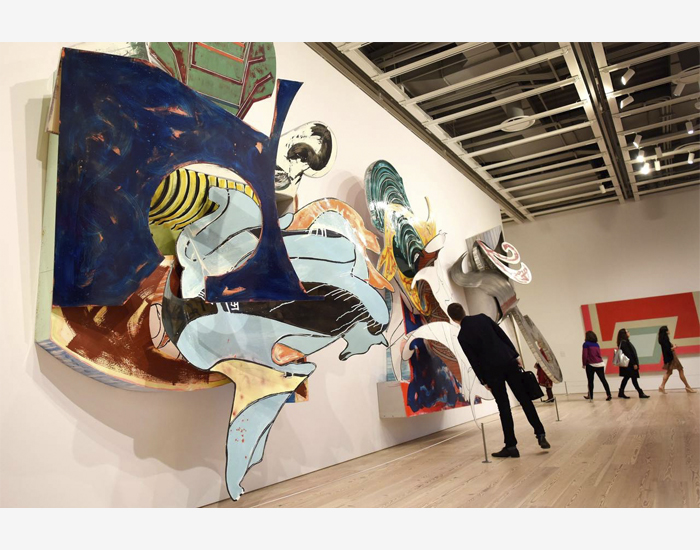 Learn about Stella’s unique series in this article from the Wall Street Journal, “The Wide, Wacky World of Frank Stella’s Titles” (2015)