Pablo Picasso was born in Malaga in 1881. He grew up in Barcelona, where he spent his childhood studying drawing and painting under his father, Jose Ruíz, who taught at the local art school. Picasso spent a year studying at the Academy of Arts in Madrid, before traveling to Paris in 1900. Landing in the center of the European art world, Picasso shared lodgings with the poet and journalist Max Jacob, with whom he lived the Bohemian lifestyle of the poor and starving artist. The next few years saw an improvement in his fortunes and he spent time in Paris and Madrid, founding and illustrating the art magazine Arte Joven. Picasso began to mingle in the company of other artists and literary figures including the poet Guillaume Apollinaire and the legendary writer, art critic and salon hostess Gertrude Stein, whose portrait he painted in 1906.

He had astonishing powers of invention, continually innovating and refreshing his work and experimenting with one style after another. His earliest distinguishable period is the Blue Period, dating approximately from 1901 to 1904 when he used a mostly blue and blue-green color palette and painted poignant images of beggars, prostitutes and other tragic figures from the streets of Paris. His Rose Period, which followed thereafter, made use of a warmer color palette and focused on generally less somber subject matter. Around 1907, Picasso became very influenced by African masks and art which began making their way into Parisian museums following the expansion of the French Empire into Africa. The faces and simplified, angular planes of the women in Picasso's Les Demoiselles d'Avignon, clearly derive their style from African masks and sculptures and this painting is often heralded as the beginning of Cubism. Along with his contemporary, Georges Braque, Picasso began to develop an artistic style, later known as Analytical Cubism, which approached the visual world from the perspective of geometric forms. In 1926, Picasso turned towards Surrealism, a movement that was growing in strength and popularity among Parisian artists. Picasso’s most famous surrealist work, Guernica, depicted the bombing of Guernica during the Spanish Civil War. This painting is a powerful anti-war statement warning against the suffering and devastation of war.

Arguably one of the greatest, most radical and most influential artists of the 20th century, Picasso’s legacy is far-reaching and enduring. More than any other artist, Picasso defined Modern Art of the twentieth century by his establishment and development of one of its major movements, Cubism. Pablo Picasso – Variations on a Theme 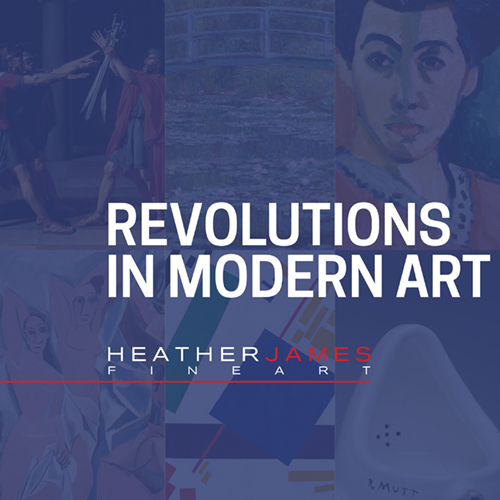 In Revolutions in Modern Art, we hope to shed light on how Modern art’s greatest names have changed the course of art history. More...