Heather James Fine Art explores the intersection of Art and Literature through modern and contemporary art. For millennia, visual art and literature (including written and oral works) have mutually influenced one another, providing a fountain of inspiration from which either could draw. The selection in this exhibition specifically examine how artists have translated both the structure and substance of literature in the last 150 years.

The first interaction between art and literature is the transformation of actual narratives into visual illustrations. One of the most famous and influential artists in this field is N.C. Wyeth, who was widely sought after to depict popular novels and poems. N.C. Wyeth’s unique talent is in his ability to capture a narrative’s crucial moments, creating an image of deep drama and tension from just a few words. Patriarch of the Wyeth artistic dynasty, which includes his son Andrew and grandson Jamie, his influence touched future illustrators and artists. This exhibition shares how N.C. Wyeth’s paintings transcends a range of literature that spans novels, and poetry. For more on N.C. Wyeth, visit our exhibition, “Meeting Life: NC Wyeth and the Met Life Murals”. First Edition of "The Witch" by Mary Johnston. NC Wyeth painted the frontispiece and the painting appears in our exhibition Photograph: Michelle Dean for the Guardian

For other artists, the transformation of narrative into visual art is less illustrative and more interpretive, as demonstrated by Frank Stella’s “The Musket”. The wall sculpture is part of Stella’s series that interprets each of the 135 chapters of Herman Melville’s classic novel, “Moby Dick”. Written in 1851, “Moby Dick” has influenced almost every corner of Western culture including literature, art, film, music, and theater. Even the famed coffee chain, Starbucks, found inspiration in Melville’s novel – the company is named after the first mate, Starbuck. The chapter that inspired this piece, “The Musket”, copes with the aftermath of a typhoon and Starbuck’s moral dilemma to stop Captain Ahab’s mission of revenge against the white whale.

Another way that visual art has incorporated literature is by copying its forms and structures. Take for example Barnett Newman’s series, “Canto”. A style of long form poetry that is often performed musically; the name “canto” derives from the Italian for song or singing. Newman interprets this structure of poetry by creating 18 “cantos”. As Newman stated, “Here are the cantos, eighteen of them, each one different in form, mood, color, beat, scale, and key. There are no cadenzas. Each is separate. Each can stand by itself. But its fullest meaning it seems to me, is when it is seen together with the others.” In the works, Newman replicates poetic conventions such as rhyming, rhythm, or symmetry into meditative visual pieces.

Ed Ruscha’s set of holograms, “The End”, also applies literary structure to fine art. By mimicking the end titles of Golden Age Hollywood, Ruscha also re-interprets cinematic and narrative conventions in his own artistic practice. “The End” is a cinematic theme that the artist used in the 1990s and 2000s, appearing in paintings, prints, and drawings – notably the 1991 large-scale painting at the Museum of Modern Art. Addressing the passage of time and obsolescence, Ruscha makes use of an antiquated typeface and the old cinematic tradition of using text in film.

Of course, no artwork can fit into these two categories completely. Contemporary artist Jenny Holzer is known for incorporating aphorisms and truisms into her sculptures and installations, blending both original writing and visual languages.

While we think multidisciplinary approaches is a more contemporary phenomenon, artists and writers have been in conversation with each other for centuries. Art and Literature do not exist in separate spheres but rather, interact and influence each other. Each delves deep into what makes us human, a desire to create, to tell stories, and to share.

“Painting is poetry that is seen rather than felt, and poetry is painting that is felt rather than seen.” – Leonardo da Vinci 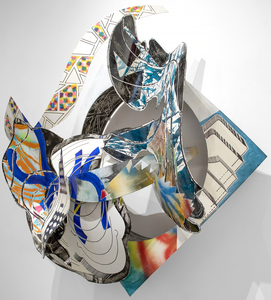 The Value of Herman Melville

The Value of Herman Melville: Watch this presentation from Amherst College Professor of English, Geoffrey D. Sanborn, where he discusses Herman Melville. N.C. Wyeth specialized in illustrating outdoor American life, especially the Wild West. The Saturday Evening Post looks at how this artist, who would go on to found America’s greatest art dynasty, got his first big break. Robert K. Wallace shares highlights from his physical and intellectual journey in trying to follow, and then interpret, Frank Stella’s twelve-year pursuit of Melville’s Moby-Dick—from the first prints and painted reliefs of the mid-1980s to the concluding prints, reliefs, and sculptures of the mid-1990s.
Inquire