The Female Gaze: Women Surrealists in the Americas and Europe

Piercing through the male gaze, works by leading American, British, Latin American, and Polish female Surrealist artists will be on view at Heather James Fine Art, New York, from May 8 – July 31, 2019. The Female Gaze: Women Surrealists in the Americas and Europe frames the history of the movement by focusing exclusively on the pivotal role played by female artists as independent from—rather than in relationship to—their male counterparts. Featuring paintings, sculpture, mixed media, and collages spanning from 1938 to 2008, the exhibition also seeks to reveal the underlying political, social, and cultural attitudes that influenced ideas of gender.While Surrealism’s revolutionary tenets called for opening both eyes and minds by unleashing the subconscious, many of its leading proponents continued to view the female form as an object of masculine desire and fantasy.Embracing Sigmund Freud’s theory of the ‘dream-work,’ the female figure became a subject often rendered disfigured, dismembered, or mythologized, as reflected in works by Max Ernst, Man Ray, René Magritte, and Salvador Dalí, among others.

Over the past decade, there has been a growing recognition by museums, galleries, and auction houses about the important role played by women in the Surrealist movement.Despite their geographic and cultural differences, many artists featured in this exhibition such as Leonora Carrington and Leonor Fini rebelled against the pervasive sexism of the period. Carrington, who later became a champion of the women’s movement in Mexico during the 1970s, cautioned, “I warn you, I refuse to be an object.”

Exhibition highlights include a mystical portrait of an animal-human goddess, Untitled, by Leonora Carrington (1917-2011) from the late 1960s; a Mannerist-inspired painting mourning infertility, L’envers d’une geographie, by Leonor Fini (1907-1996) from the early 1960s; and a dreamlike  nocturne, Sulky Lion, 1943, by Stella Snead (1910-2006). The exhibition also includes works by Magdalena Abakanowicz, Aube Breton Elléouët, Helen Lundeberg, Teresa Pagowska, Kay Sage, and Manina Tischler, among others. Though often critically marginalized, these uncompromising visionariesrebelled against the prevailing cultural norms and expressed the workings of their own inner psyches and desires.  Over many decades and waves of women’s movements, the striking imagery advanced by these early feminists—including pointed depictions of female bodies—continues to resonate today. 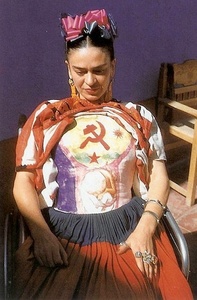