Heather James Fine Art presents a survey of Abstract Expressionism looking at its genesis and development over several decades. Covering several generations of artists from the infamous Irascibles to the core group of The Club, including overlooked artists on the West Coast and women. Works of this caliber and breadth are not often found outside of public institutions with only a few providing this level of scope. This is a rare glimpse into a broader picture of an important chapter of art history.

But what is Abstract Expressionism and why was it so important? Also known as AbEx, it is the movement of non-representational art that placed primacy on the artist’s emotive mark-making. Many adherents met and worked side-by-side during the 1930s. But, it burst onto the scene after World War II, emerging from the destruction of the war as America found itself with both newfound confidence and anxiety of a new present. This group of artists worked through the trauma of the past and apprehensive optimism of an everchanging future.

Within this exhibition are pieces by the Irascibles. The Irascibles were a group of artists who protested The Metropolitan Museum of Art’s exhibition “American Painting Today – 1950” for the institution’s emphasis on figurative painting. Photographer Nina Leen immortalized the group in a photograph, forever cementing them in art history. Among the group were Theodoros Stamos, Barnett Newman, Mark Rothko, Richard Pousette-Dart, William Baziotes, Jackson Pollock, Willem de Kooning, Adolph Gottlieb, and Ad Reinhardt. Many of these artists are in this exhibition, giving a starting point for the show.

It is interesting to note that very shortly, these artists would outshine any others, leading the charge for abstraction which would become the dominant art style for decades. In fact, in only a few years, figuration would become the face of avant-garde art against abstraction. Many of those who were adherents to the separate and distinct San Francisco School of Abstract Expressionism would form the Bay Area Figurative art movement not too long after the formation of the Irascibles. Nevertheless, a few of the West Coast artists like Richard Diebenkorn, represented in this exhibition, would hold true to abstraction.

Among the photographed Irascibles, only one was a woman despite the number of women who not only were major players of Abstract Expressionism and abstract art in general. In fact, the sole woman in the Irascibles photograph, Hedda Sterne, was nearly pushed out of the image as they believed a woman would make the group be taken less seriously. One of the characteristics applied to the movement was a sense of heroic and brash masculinity.

Part of it was the ingrained structures but the other part was a by-product of the Cold War. The U.S. government through cultural institutions promoted Abstract Expressionism as a manifestation of American freedoms and ideals. This was to contrast the Socialist Realism of the Soviet Union and a show of soft power in the covert propaganda war. This is not to say that the movement was spawned by the government but that its messages and style were subsumed covertly within the war of propaganda. Nevertheless, within this is another tension. Many of the artists were distrustful of the U.S. government.

Thus, it was easy to push aside the contributions to the AbEx movement by women and artists of color. But women were not just participants but active shapers and leaders. Mercedes Matter was the first woman admitted to “The Club”, the inner group of Abstract Expressionists and was a founding member of the American Abstract Artists. Elaine de Kooning was also a member of the Club and was known for her lightning quick brushstrokes.

What is unique about this exhibition is that it does not just focus on the first generation of AbEx artists but turns its eye to the second and third generation, showing the influences as they stretch through the decades and the new innovations. There is a thread of Color Field art from Mark Rothko and Helen Frankenthaler to Paul Jenkins. We can compare and contrast the intense rivalry of Barnett Newman and Ad Reinhardt. Where do the harsh words they exchange contain truth in their respective canvas and how much was just a difference of theory and process? The exhibition covers the second generation of Abstract Expressionism in the works of Grace Hartigan and Judith Godwin. Hartigan’s work was acquired by the Museum of Modern Art – the first of that generation to be acquired by any museum. Hiding amongst these major pieces are quiet moments of reflection – the similar but different lines of early Richard Diebenkorn and Philip Guston, the mutual respect of Willem and Elaine de Kooning.

The exhibition covers a wide breadth of Abstract Expressionism tracing the radical nature of the movement as it courses through history within a single artist’s oeuvre and from one generation to the next. For even more works and a deeper dive, visit our other exhibitions including “Elaine and Willem de Kooning: Painting in the Light” and “Abstract Expressionism: The Persistent Women”. 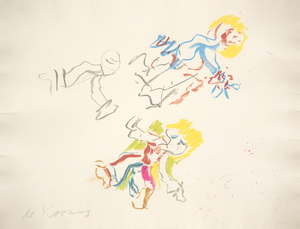