Ask someone to name a single artist, let alone an Impressionist one, and many will answer, “Monet”. Few artists have made such a singular impact as the Impressionist painter Claude Monet. This special display explores how and why Monet became the artist he was and the impact he made.

The display opens with L’Ancienne rue de la Chaussee, Argenteuil an early painting by Monet depicting the town of Argenteuil. 1872 was an important year for the French Impressionists as it was shortly before the first of their eight exhibitions took place and the genre’s identity took form. In fact, the piece of art that gave Impressionism its name, Impression, Sunrise, was painted the same year as this Argenteuil painting.

Argenteuil was an important hub for Monet and his fellow Impressionists. Monet spent six years in the town, honing his craft. Other Impressionists such as Monet’s friend Alfred Sisley would spend time in the hamlet. In fact, Monet and Sisley would paint side-by-side as with this street scene of Argenteuil. Sisley’s version is now in the esteemed Musée d’Orsay in Paris. Both artists captured a moment in which the rural nature of Argenteuil held out against the looming industrialization. Impressionism was not just the force of a single man but developed through friendship, conversations, and joint painting excursions.

Monet’s L’Ancienne rue de la Chaussee, Argenteuil represents not only an important place and time for the Impressionists but also a significant time in Monet’s development. The work was painted the same year as the seminal Impression Sunrise, whose title would go on to inspire the genre bestowed upon Monet and his fellow artists. Additionally, L’Ancienne plays a significant role in Monet’s family history, as it was originally gifted as payment for his son Jean’s school tuition.

L’Ancienne rue de la Chaussee, Argenteuil is a softly modulated interpretation of this quaint and historic street; a luminous, late afternoon study of light and shadows as they play against the folding and unfolding planar aspects of facades and roofs of the buildings lining the street. The composition is built upon an open, virtually unbounded base foreground, the lines of which are of a severe convergent triangulation, aided by well-orchestrated effects of light and shadow that inexorably carry the eye to the narrow confines of rue de la Chaussée near the center of the picture plane. Yet it is the light-hued warm tints ranging from soft pinks to mauves that lift the shifting planar elements of the architecture to a setting of extreme beauty, aided by the formal accents of phthalo blues and greens evident in the clothing and window shutters — a splendid painting that foretells of so much to come.

Coup de vent, created in 1881, reveals a more assured painter. Painted at the Normandy coast, where gusts of wind race through town ten months out of the year, the title Coup de vent (“Gust of wind“) infers that Monet painted this scene on yet another blustery day. Observing the easterly sway of these trees, it is no surprise that the wind almost always sweeps through this region from the west.

Monet completed four canvases during this particular trip to Normandy: a singular scene painted from the beach at Sainte-Adresse and three pictures looking seaward from the bluffs above Trouville. Today, Coup de vent is the only one of these four works that remains in private hands.

Trouville is where Eugène Boudin and Johan Jongkind introduced Monet to landscape painting en plein air (painting in the open air), and Monet had stayed here with his late-wife Camille and their young son Jean just before the outbreak of the Franco-Prussian War in 1870. So, the second anniversary of Camille’s death on September 5th likely preoccupied Monet’s thoughts while painting Coup de vent, as it was executed during late August or early September. The painting provides a beautiful tension between the effervescent light and colors and the blustery winds amongst the tilting trees, a reflection of Monet’s ties to the location and his personal history. It becomes more than a landscape.

Monet’s dealer Durand-Ruel acquired Coup de vent from Monet in 1883 and it was subsequently sold to the American collector Harris Whittemore in 1891. Whittemore, a close friend of Mary Cassatt, would go on to develop an important collection of Impressionist masterpieces. The provenance speaks to the important nature of the work, lending even more storied history to the painting.

Additional Works from The Trouville Series The Museum of Fine Arts, Boston Separated by almost ten years, these two paintings showcase the development of Monet’s technique, the importance of collaboration and the influence of his personal history on his oeuvre. More than technical mastery, Monet’s paintings reflect his life, the joviality of friendship and the complexity of a life well lived. 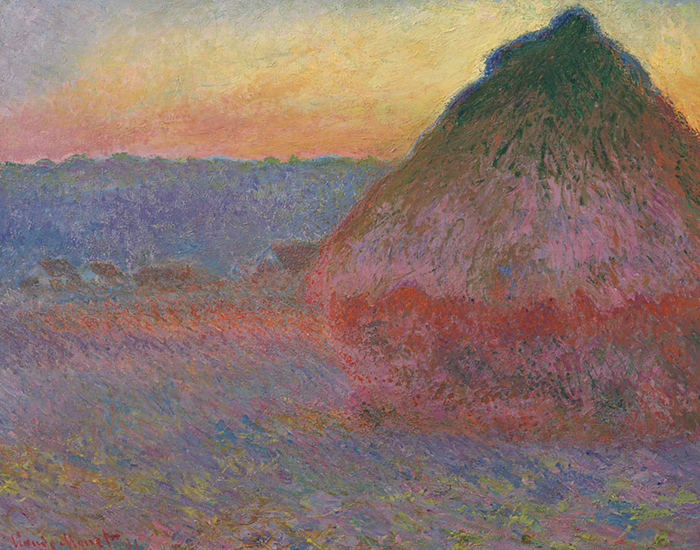 The graph by Art Market Research shows that since 1976, paintings by Monet have increased at a 9.6% annual rate of return.

The graph by Art Market Research shows that since June 2020, paintings by Monet have increased at a 67.8% annual rate of return.

“Other painters paint a bridge, a house, a boat… I want to paint the air in which the bridge, the house and the boat are to be found – the beauty of the air around them, and that is nothing less than the impossible.” – Claude Monet This video from the Art Institute of Chicago presents an in-depth look at Monet’s approach to painting in series. NPR looks back on the importance of Monet’s dealer, Paul Durand-Ruel, in the development of Impressionism as part of their coverage of the Philadelphia Museum of Art’s 2015 exhibition on the same subject. Holiday in a Painting

Sarah Hardy, registrar for London’s National Gallery, shares details on another painting Monet created in the coastal town of Trouville, the same location where “Coup de vent” was created. “The Case for Impressionism” from The Art Assignment

PBS series, The Art Assignment, presents a case for why Impressionism is interesting and worth your attention and admiration, beyond the famous names behind it of Claude Monet, Berthe Morisot, Edgar Degas, Pierre-Auguste Renoir, Mary Cassatt, Alfred Sisley, Camille Pissaro, Gustave Caillebotte, Paul Cézanne, et al.