This artwork is no longer available.
Please contact the gallery for more information.
“Buying is more American than thinking, and I’m as American as they come.” Andy Warhol

Who else but Andy Warhol could almost literally print money? Perhaps one of the most famous artists, not just in America but globally, Warhol upended our understanding of what counted as art, the production of art, and the consumption of art. From his elevation of the humble Campbell soup can to the alluringly dark portrait of Marilyn Monroe, Warhol deciphered the values of American society filtered through a glamours lens. He captured our collective imagination while also infiltrating our visual landscape.

It was not just his subject matter that altered visual culture but his process to create art. Warhol began making silkscreen paintings in 1962 because of its assembly line process in which he could remove the hand of the artist as much as possible. To create these works, Warhol would select photographs from newspapers and magazines, send them to a printer to be enlarged on silk screens, and then direct assistants to lay the screens over canvases and apply his carefully chosen colors with a squeegee. In this way, Warhol could produce works quickly and mechanically, a strange twist of Minimalism’s obsession with mechanization and the reduction of the artist’s hand.

Warhol understood art as commerce and commerce as art. Never compromising on either side, he could present works that are shallow pandering and thoughtful comments on American society.

Although most associated with the Pop Art movement of mid-century America, Warhol reached the pinnacle of his career and perhaps his most distilled vision of the country during the 1980s. It was during this decade in which Warhol reached the epitome of his examinations and in which he painted Triple Dollar Sign. More than ever, Warhol turned his eye to the rich, famous, and infamous, shining a light on what it means to be American and what is American culture.

Perhaps in no other decade could Warhol produce a series of paintings comprised of singular or multiple dollar signs. The 1980s is, after all, the era in which Gordon Gekko declared in the movie Wall Street that “… greed, for lack of a better word, is good.” Warhol was free to examine material exuberance at its height, and very few things can best symbolize it than a dollar sign. For more on Warhol of the 1980s, visit our virtual exhibitions Andy Warhol: Polaroids and It Was Acceptable in the 80s.

However, this preoccupation did not just spring forth in the 1980s but had been a lifelong obsession. In the 1960s, Warhol screen printed dollar bills; additionally, his focus on consumer goods like soup cans and brillo boxes point to an understanding of money’s influence on visual culture.

In stripping away any other symbolism or reference to currency in his 1981 series of Dollar Sign paintings, Warhol dares the audience to conflate money and art while also collapsing fine art and pop culture. The dollar sign surrounds us every day, more so in the age of the internet in which with a click of a button we can fulfill our wants and desires. As art impresario Anthony d’Offay said of his work during in the 1980s, “They seem to be prophetic.” His work including this painting speak to the time in which they were created and to the reverberations into our present society.

Beyond the symbolism of the dollar sign, we can appreciate the painterly qualities. Warhol originally drew dollar signs, photographed and then silkscreened the resulting image onto the canvas. The three dollar signs are each individual both in their shape and in color. Their wild colors and sinuous lines both entice and repel. They become at once symbol and abstraction. The audience comprehends the painting as a statement of money and as abstract shapes. It is almost as if the work were an ad for money itself. There is a duality in the work – an empty statement concealing profound complexity.

The Dollar Sign paintings are Warhol at his most ironic and sincere. 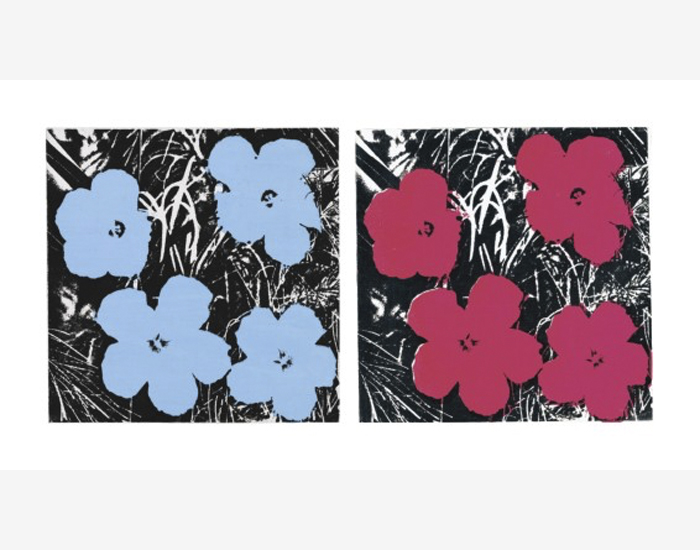 “Dollar Sign” (1981) acrylic and silkscreen on canvas, 109.5 x 70 in. Musée d’Art Moderne et d’Art Contemporain, Nice
“A Coke is a Coke and no amount of money can get you a better Coke than the one the bum on the corner is drinking. All the Cokes are the same and all the Cokes are good. Liz Taylor knows it, the President knows it, the bum knows it, and you know it.” – Andy Warhol